So you’ve decided you want to buy a new Apple Mac laptop and now you would like some help deciding which is best suited for you.

Despite narrowing it down to wanting a MacBook there is still a fair amount of choice as there are many different variables to consider when deciding which model is best for you. Size of screen, speed, storage capacity, portability, battery life, connectivity, media capabilites etc.

We here at Bits & PCs have taken the three most popular models and compared them to see which is most suitable for who.

Why get a model with a 13 inch screen?

Simply put 13 inch is the best compromise between functinality and portability. 15 inch models aren’t convenient to carry about, no matter how slim or sleek the new 15 inch Retina model may be. As a computer you primarily leave at home, then a 15.4 inch Apple MacBook Pro Retina would be the best choice, at least until Apple decide to reintroduce the 17 inch model.

11 inch models on the other hand are great to carry about and use on the go, but should you need to do something more productive, then the limited screen workspace is a bit of a pain. As a second computer that you can use purely on the go the 11.6 inch Apple Macbook Air is a great little system, but if its your only computer then you may start wishing for the extra screen area.

So we are left wth the 13 inch models. Easy enough to carry, yet can be comfortably used for more productive purposes. 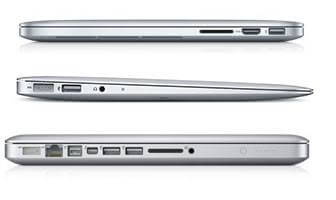 The Apple MacBook Pro unibody design came out all the way back in 2009 and hasn’t changed at all. It still looks great, but put side by side next to its two little siblings it looks bulky and cumbersome. It also weighs in at 2.06 kg, that is 31% heavier than the Retina model (1.57kg). Definitely the loser out of the three.

Both the Air and the Retina look great. The Airs design came out 4 years ago, and it is still arguably the best looking ultrabook in the market, but maybe it is the fresh design of the Retina that edges it out, but it looks and feels more solid and sturdy with a consitent thickness, unlike the wedge shaped Air, whilst being only ever so slightly thicker overall. On to the Retinas main selling point, the screen. The Retina display is stunning, very crisp, with bright colours, it is fantastic to use. Plus the increase in usable work space the huge number of pixels means its not purely an aesthetic feature.

The advantage the air has in this area, is the more matte screen. The Retina and the Pro have a glass front, which gives all the colours a nice bright gloss look, the disadvantage is they are both very reflective which can be a nuisance trying to work in sunlight. However most of the time The Retina model easily trumps the other two.

Both the Pro and the Retina are very solidly built. Class leading in fact. Very few laptops we have seen come through here have the same build quality as either of these. The Pro has been with us for 5 years and old models still feel solid and well put together, and the Retina feels like its built to the same standard.

Due to the Air being the smallest Macbook overall it does feel a bit flimsy compared to the Retina and Pro. The screen itself is also far more susceptible to pressure marks if you leave heavy objects are placed ontop of it e.g. mugs. As an ultrabook its build quality is ahead of most of the competition, but compared to the Pro and Retina it is the most delicate of the three.

With their use of Aluminium bodies, all three are susceptible to dents and scratches. If you want to keep it looking new, Speck have some great hard cases for these three models. However try to take the hard case off regularly and clean it as particles can get trapped between the case and the laptop and actually begin to scratch the laptop.

The current Pro actually came out in 2012 and uses the slightly dated Intel Core i5 3210M 2.5GHz. It still produces a reasonable passmark score of 3801. This is still a good score and for majority of users plenty powerful enough.

The Apple MacBook Air uses a newer generation much more power efficient Intel Core i5 4250U 1.4GHz. Despite its lower GHz speed and being far more power efficient using only a maximum of 15W TDP compared to the 35W TDP of the Pro, it gets a very respectable score of 3459, which is only 10% less than the Pro, but with all the added advantages of better battery life and less heat.

The Retina also uses a current generation Intel i5-4278U 2.6GHz. Faster and more power efficient than the Pro, but not quite as power efficient as the Air but with a score of 4426 is 28% faster than the Air.

The graphics card on the Pro is also the slightly dated Intel HD 4000 and brings up the rear with a score of Pasmark G3D score of 456. Next up is the Air, its newer Intel HD 5000 chipset has a significant 32% speed advantage over the Pro with a score of 604.

The Retina uses the Intel Iris 5100 with a score of 745. This may seem the best of the lot but with a huge number of pixels on screen it does have the heaviest workload, so in real terms, the Air actually has the advantage here.

Where the Pro really lags behind is with its hard drive. It uses an old 5400rpm mechanical hard drive, whilst the Air and Retina both use flash technology. This is the most noticeable day to day speed advantage the Retina and Air have over the Pro. Everything loads instantly with barely any waiting time.

All three use identical 1600MHz DDR3 memory so in theory all run at the same pace. The Retina however has double the amount of memory of 8GB which give it a huge advantage for heavier work loads such as photo editing and video editing.

Mechanical hard drives are much slower, use up more power and are less reliable than flash based storage. However they provide very cheap very large amounts of storage. As standard the Pro has 500GB of storage compared to the Retina and Airs 128GB. Upgrading it is also a lot cheaper and can be done at any time unlike the Air or Retina where you are pretty much stuck with what you have bought. You can even choose to upgrade to flash technology or change the DVD drive to another hard drive. You can have 4TB of data or mix and match flash technology with mechanical so you get speed and storage. The Pro has a lot flexibility in this area and is easily the winner.

The Air and the Retina both come with 128GB and upgrading is expensive. If you want 256GB then you have to for out between £150-£200. 512GB would cost a further £200 on top of that. Plus they’re is no upgradability. Before choosing one of these models check how much storage you are currently usng to indicate how much you would need.

As mentioned earlier the Air uses the most efficient processor using up only 15W of power and with flash hard drive technology, this gives it a battery life of 12 hours. The more powerful Retina with its high definition screen still gives a very respectable 9 hours of use, which is great. Even the 2 and half year old Pro has plenty of juice compared to its competitiors with a 7hour battery life.

However the winner here is easily the Air,

The Air comes in at a reasonable £849 which considering the technology is a a very good deal. Last year these were selling for at least £999. The MacBook Pro is next cheapest at £899, however considering it is over 2 years old we feel this is the most overpriced of the 3. The Retina however although the most expensive at £999 is a relative bargain considering the technology and build quality. The previous 13 inch Retina was being sold for £1399 only last year.

So despite being the most expensive, the Retina provides the most power and technology for your money.

Coming in at only £999, you get the highest definition screen of any 13 inch laptop, the latest processor technology, 8GB of memory, and great desing and build quality it is our top choice for this Christmas.

Our only precaution is to check how much storage you need because 128GB is not a huge amount. You can either choose the higher specification model or make arrangements to store your large files on an external drive.