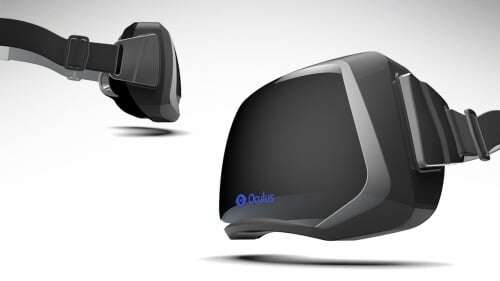 When searching for a new gadget to tweet about I stumbled upon Sciencefocus.com Top 5 Most Exciting Gadgets 2013 and saw the comments about the Oculus Rift. I had heard rumblings about this device back in the summer, but seeing it being potentially released in 2013 got me excited. This is the device that John Carmack, the creator of Doom has given his personal seal of approval.

There’s already a lot of hype around this device and that among others the heads of Valve, creators of Half Life and Portal, and Epic, creators of Unreal technology, are backing this product and pledging to support it and incorporate it in their future products, so everyone who is interested in gaming should be very interested in seeing how the development of this device goes.
Search “Oculus Rift” for yourself on YouTube, and you will see game developers and game journalist show genuine excitement and awe when trying out the Oculus Rift.

What makes the Oculus Rift so exciting.

The Oculus Rift will apparently almost fill up your field of view. You’ll even have to look side to side and up and down to grasp the whole picture. You’ll finally have peripheral vision in a game without the annoyance of screen bezels. 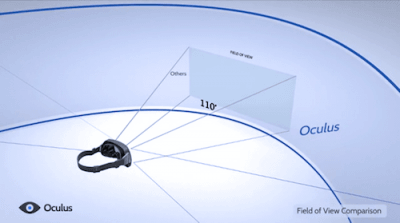 To increase immersion the movement of the image has to match exactly the movement of your head with minimal delay. Oculus claim to have reduced latency, ie the delay, to a very low and practically unnoticeable level. You simple move your head and the image you see moves.

Whilst 3d is pretty standard, 3D combined with the high field of view makes the images less like a 3d hologram on a screen and actually immerse you in the environment.

The Oculus 3D rift is still a way to go but it’s aimed at the consumer crowd and there are rumours that it is to be priced at only $300. That’s less than £200. Considering a good monitor costs more than that, this can be considered a bargain IF it is released at that price, but don’t be too disappointed if it doesn’t, after all it is state of the art equipment.

What I would like to see with the Oculus Rift.

If only a few games support this then it will not be a success. So it would be great if all the big guns support the Rift fully. And as much as PC gaming is still ahead of the rest in terms of technology, if the likes of the new Xbox and PlayStation be made compatible with this technology then it would pretty much guarantee its success and provide dozens more games to use with it. It can even in theory be combined with the Kinect to add another level of interaction. Unlikely scenario for the foreseeable future though, as it will probably be PC only for the time being.

The PC has a huge amazing back catalogue. Imagine being immersed in the world of Skyrim or Mass Effect with VR technology. It’s unlikely that all game developers would go through their back catalogue converting their games to be compatible. So we would need Oculus or a third party to develop conversion software for games that are not specifically designed for the Rift. IZ3D and Tridef have software to convert games into 3D, so it should not be too much of a leap for similar developers to do the same for the Rift.

Update: Good news. Software called Vireio Perceptionis is in the works to do this exact thing. So you can re-experience and immerse yourself in the classics.

To find out more about the Oculus Rift visit www.oculusvr.com